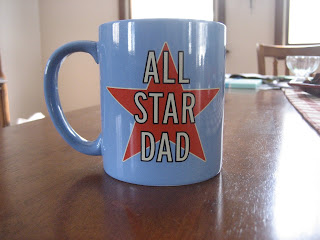 More evidence that I deserve my “All Star Dad” mug came when I was chatting with our 10 year old on the walk home from the school bus stop.

I asked if she’d yet made any new friends in the new school year.

She then out-of-the-blue revealed she’d two years ago heeded some of my keystone advice and that it had really paid off.

“Do you remember telling me the way to make friends is to ask strangers if they want to be friends?”

I did. I for years have told my daughters as they depart for the first day of school that this was the day they could meet someone who’ll be their very best friend for the rest of their lives.

It’s a beautiful sentiment because it’s true. Every time we step outside the house we have an opportunity to make a brand new friend. Think about that and open your eyes to the possibility. It’ll enhance your every human encounter.

What can I say? Some days I channel Fred Rogers.

When the girls get older I’ll be sure to amend the sentiment to include the fact that, this being modern America, any time they step outside they could also intercept a bullet so be sure to duck anytime you hear gunfire.

What can I say? Some days I channel Chris Rock.

Two years after she’d first heard the advice, Lucy told me that was how she’d met Aryn and Ally.

“I went up to them and said, ‘My name is Lucy. Do you want to be friends?’ They said yes and today they’re my best friends.”

I was blown away.

For many years, darling Lucy was what many adults describe as shy.

They’d say it in a voice that sounded like they were diagnosing leprosy.

I treasure shy people and am daily thrilled I have a role in raising one of them.

Knowing her as I do, I’d say it was just a matter of time until her confidence caught up with her vivacious personality.

Way too many adults — predominantly males — have the exact opposite problem.

Another is running for president!

We’re confident. We brag. We bluster. We blog. We shout to the world we have really big hands.

But for a moment think of the courage of that quiet little 8 year old daring to approach playground strangers to humbly request their friendship.

Remember how painful any rejection is at that age? She’s risking humiliation, taunting and stony indifference.

The kid could be on Seal Team 6.

The rise in on-line isolation saddens me for the future. We’re so wedded to our virtual diversions we’re blind to the chances to make authentic friends.

We could learn a lot from kids like Lucy.

Keep the phone in the pocket. Make eye contact. And be confident you’re offering for free something every single human being wants and needs.

Asking anyone if they want to be your friend is so disarming it infuses the brain with joyful potential. It hints at Tom-and-Huck-like adventures to be. It opens the possibility of a lifetime of laughter and inside jokes in rooms full of strangers.

“Hello. My name is Chris. Will you be my friend?”

There. Good. Isn’t that a great way to start a new day?

And tomorrow I’ll cement our friendship by asking for the first time, but not the last, if I can bum twenty bucks off you ’til the weekend.

It's just what friends are for.

Chris: This may be one of your best posts ever. How wonderful for your daughter!