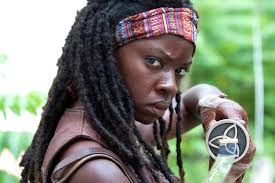 The show had been gut-wrenching — and I don’t mean that as a dramatic critique.

No, in “Walking Dead” you can see people use things like wrenches to remove guts. It’s a weekly disgust.

My wife, a devoted fan, was eager to talk about it. She wanted to pick my brain.

“Are you done with it?” she asked.

I told her, no. I still feel invested in the characters and the prepper in me is still compiling survival tips on what to do in the event zombie apocalypse becomes a reality and I’ll need to be alert for a more literal kind of brain picking.

But last night’s season 7 premier crossed a line with me.

I won’t say the show jumped the shark. “Walking Dead” producers would never let that happen, opting, I’m sure, to work a zombie shark plot line into the series.

The wanton gruesomeness of last night’s de rigeur violence left me feeling diminished. Is this really how I want to spend an hour? Does this qualify as entertainment?

The presidential debates are more uplifting.

At least with those — and they’re every bit as gruesome as “Walking Dead” — I know I’ll get to see Alec Baldwin ridiculing Trump.

Anytime televised violence becomes stomach turning because characters are getting their stomachs turned (or chewed), it’s time to re-think how I’m spending my time. So I’ll, for now, continue watching “Walking Dead,” but all the while my mind will be drifting to what I’d rather be watching. The list includes:

• “Cheers” — It’s on one of the retro channels and we DVR about 20 of them at a time. I hadn’t seen the show in about 15 years and I wondered if it still held up. Boy, does it. It remains uproarious with each character deftly acted and right on the money. I love to laugh so, ergo, I’ll always love “Cheers.” It sounds heretical, but it’s right up there with “Seinfeld” and “Seinfeld” is right at the top.

• “The Fugitive” — It was about 20 years ago, before kids, and I was seeking a good show to watch with lunch. Val at the time had a full-time job in Pittsburgh. I vaguely remember my father telling me to check out David Janssen and “The Fugitive” reruns. I watched one and was blown away. Each episode was a dramatic gem. I remember Val coming home and me saying, “We’re going to have to start taping these shows to watch with dinner. They’re that good.” She responded with some version of, yeah, right, we’re going to tape shows that first appeared in 1963. Today, it remains one of our all-time favorite shows. We even have an episode guide!

• “Breaking Bad” — The show went off the air three years ago last month and I’ve ever since been itching to start it all over. It’s that good, in my opinion the best show ever. I’d watch “Mad Men” and “Sopranos” from the start again, too.

• The World Series — Now’s the time of year when every pitch becomes so precious because I know baseball’s about to be cruelly ripped from my life. In the summer, baseball is my televised security blanket. Personal calm is elusive when it isn’t near. Barring a zombie apocalypse, I’ll be writing about the World Series tomorrow in advance of Game 1.

• “The Larry Sanders Show” — Brilliant Garry Shandling comedy with equally brilliant cast led by Jeffrey Tambor and Rip Torn. Again, I just love to laugh and this one makes me very happy. HBO ran 89 episodes from 1992-98. I have a compilation disc with about 20 of them on there. Each is golden. You know what else is still really, really funny? “Third Rock from the Sun,” starring the peerless John Lithgow. Sitcom trivia: The career-making Frasier Crane “Cheers” role that went to Kelsey Grammar was offered first to Lithgow.

• A roaring fire — Hallelujah! The weather has finally turned. I welcome the fall chill. I love fall days cooking soups and warming the house with a nice fire. And if I’m in front of a fire, naturally, I’ll have a good book with me. I’m right now in the middle of Tom Wolfe’s excellent “Bonfire of the Vanities” from 1986. It’s particularly timely with so many egos and ambitions dominating our news.

• “Walking Dead” — It’ll never be one of my all-time favorite shows — I doubt I’ll ever re-watch more than an episodic scene or two — but this show was once great.

I think it’s too infatuated with devastating its audience with increasingly graphic violence. Last night’s brutal killings of two main and beloved characters couldn’t have been more disgusting.

Plus, I don’t foresee a “Walking Dead” happy ending and that turns me off.

Like the kind awaiting that lucky pizza delivery boy!