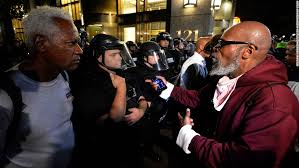 I predict within five years our socially-conscious pharmaceutical manufacturers will develop a pill that will for weeks at a time alter our skin pigments. The pill will act like hair dye, but for the whole epidermis.

I’d like to see as part of their training our white police officers be given ones that let them know what it’s like to appear black.

I think that would be helpful.

Heck, I’d take one of those too.

Being black for me would be ironically enlightening.

See, I have zero personal insights on what it’s like to be black.

Everything I hear is anecdotal. Like stories about successful black men who enjoy nice cars — rich, white dudes like ‘em, too, or so I hear — getting pulled over at night for Driving While Black.

I think that would be a nuisance until you start hearing about so many unarmed black men and boys being shot dead in the streets for some innocuous yet insane escalation.

One of the commentators said about how we had a suspected terrorist who’d been shooting bullets at police survive his arrest in downtown Manhattan, yet 40-year-old Terence Cutcher was shot dead on a Tulsa street after calling 911 about a disabled vehicle.

It’s happening with such numbing regularity, who can be surprised when there are episodes of reciprocal violence?

I find it odd that an issue that is so ostensibly black and white is imbued with so much gray.

Me, when I’m in trouble, I pray a cop shows up right away. I go out of my way to be extra nice to police officers because I think they have it tough.

I was once moved to anonymously pay for the dry cleaning of a Pennsylvania State Trooper when I saw his uniform hanging there behind my stuff.

Did I extend a gratuity to a bad cop? I’ll never know.

He may have been dirty, but his uniform was spotless.

I couldn’t extend the same grace to a black person. Our skins are different, but you can’t tell by our duds.

But whenever I’m in Pittsburgh, I without fail extend extra courtesies whenever I deal with diversity.

Happened just last week. I had one of those awkward sidewalk dosey-dos with a big black guy. He stepped left while I stepped right. My nose nearly bumped into his nipple.

We both smiled. He said, “After you!” and let me proceed.

We made warm eye contact and I said, “Thanks, man. Have a great day!”

I know I’m an idiot, but I like to think our encounter reassured him we can bridge  our racial divides. Like maybe he thought, “Sure we’ve endured nearly 400 years of racial prejudice, but at least that one white dude is trying. I think I’ll go home and download some Barry Manilow!”

It’s my form of affirmative action.

I was touched by Cutcher’s father’s poignant lament: “What breaks my heart is the film shows my boy doing everything I taught him to do … and he still wound up dead.”

How can we as a people ever overcome what to me now seems institutionalized injustice?

I have to think a national pigment altering pill program would help.

Everyone could be cedar green for a month; cerulean blue the next; then, yes, we the purple!

Once we’ve been through a uniform coloring we’d all get to pick a color of our own.

After we’ve all been all the colors, maybe then finally none of them will matter.

Call me crazy, too, but I think I see multitudes of positive responses in the Charlotte protests.

I see people of all races realizing there’s a problem and taking urgent steps to solve it.

Healthy, that is, for everyone but the poor bastards who keep getting killed with their hands up.