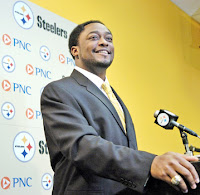 I’m hoping the Pittburgh Steelers win the Super Bowl because it’ll further my argument that blacks have been genetically engineered to lead.

Because if the Steelers win Sunday and ultimately on Feb. 1, then on that day two black men will be in charge of two of the most powerful and historic institutions on the entire planet.

Those would be the Pittsburgh Steelers and the United States of America.

Of course, one of those organizations is an internationally beloved powerhouse respected and envied around the globe and the other is the United States, but bear with me.

I spend a lot of coincidental time around bar stool racists who’ve long said blacks are intellectually inferior to whites. They’re always eager to enlighten me, a fellow Caucasian, on issues race.

Blacks are fine as athletes, they say, but are incapable of running things larger than footballs, things like, say, the world’s lone remaining superpower.

But if the Steelers win the Super Bowl, it will be due in large part to the daring and genius of coach Mike Tomlin. When he was hired in the summer of 2007, one of the bar racists bet me $50 Tomlin wouldn’t last two seasons as the Steelers coach.

This was easy money on two fronts. First, the Dan Rooney-run Steelers, unlike other professional sports franchises, are admirably picky about whom they hire and are inversely reluctant to pull the trigger and fire men in whom they believe. Prior to hiring Tomlin, the Steelers have had just two head coaches, mutual legends Chuck Noll and Bill Cowher, in the past 38 years.

By comparison, the despicable Dallas Cowboys have had five in just the past 10 years.

Secondly, Tomlin looked like a real winner. The Rooneys, no fools, hired him after passing over two other highly qualified in-house candidates, both of whom are today leading the Arizona Cardinals on their own unlikely quest to meet -- cross your fingers -- the Steelers in the Super Bowl.

Tomlin has an undeniable charisma. Reporters in 2007 immediately noted how he tends to quietly dominate a room with a dignified and commanding composure.

Hell, whenever I see him being interviewed on television, I can feel my posture instantaneously ramrod. He’s the kind of man that makes me think he has secret powers to see through the camera lens and notice which fans are slouching. I don’t want to get on his bad side.

What has Tomlin done in his first two years? Simple. He’s done what no other coach, white or black, has ever done. He’s assembled a better two-season record for a first-time head coach than anyone -- and that includes immortals like Vince Lombardi, Don Shula, Tom Landry, Bill Parcells or Bill Belichick who stunk it up in Cleveland -- yea! -- before going on to be a genius (cheater) -- boo! -- in New England.

Tomlin’s making his Super Bowl run just days after former Steeler Tony Dungy, the first black head coach to ever win a Super Bowl, announced to glorious accolades that he was leaving the Indianapolis Colts, the winningest team over the past 10 years, to do vital social work with hopeless young inmates who need shown a better way.

Dungy’s a saint. And a winner. And an African American.

I hope the other black guy who’s had his credentials questioned by ignorant whites does his job as magnificently as Dungy’s done his -- and I’m not talking about Tomlin here.

Win or lose, Tomlin already has a big head start on Obama for helping stimulate one key sector of this sad and struggling economy.

He’s taken fifty bucks out of one dumb racist sucker’s pocket and shoved it into mine.
Posted by Chris Rodell at 10:36 PM

hehee, I hope you spend that 50.00on a cheap air fare ticket to send the racist bar fly to Artic White --where he can keep it white and not complain. ; )

Not so fast. For the first time ever, I'm enjoying the company of guys like him. Their evident despair warms my soul.

Plus, that's one pigeon I'm not through plucking.

But I will put some of it aside to buy your book!