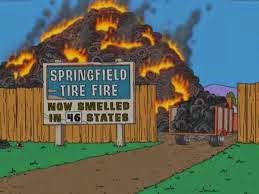 It’s difficult for me to convey just how much I detest spending money on anything I can’t eat, drink, cuddle, screw, cheer or enjoy on a golf course.

So yesterday was a bad day.

I spent $807.47 on something that will provide me no warmth or fond memories in my twilight years.

It was a bullet I had to bite. Well, four bullets, actually.

The car passed inspection in September, but my guy said he was giving me a break.

“I’ll pass you, but you’re going to want to either get new tires as soon as you see the first snow flakes begin to fall or else immediately drive your car to Arizona before they begin to accumulate,” he said. “You can’t make it around here in winter on four tires this bald.”

The last two weeks proved my grease monkey to be a wrench-wielding prophet.

The snows haven’t ceased and I’ve been fearful I’d either get stuck at the bottom of our hill or slide off a mountain. My odds of an accident were increasing.

So I went sliding off to the local tire store.

In these situations, all I have is my trust. I don’t do any research, price comparison or spend a few tedious hours poring over Consumer Reports

I think this must disappoint your typical tire salesman because after we dispensed with the small-talk preliminaries, he began to quiz me.

I stared back at him for so long he must have thought I was reveling in tire options.

“Let me ask you a question: When was the last time anyone who drove a 2007 Saturn Vue with 133,000 miles came in and knew even a little bit about tire performance specs?

I told him not to answer and I continued.

“Here, in order, are my tire priorities: I want cheap and I want round. I’ll take oval as long as it’s cheap and and I’ll even take square if it’s really, really, really cheap. Just give me a set of four somethings that are cheap and will help me move the vehicle in the direction it’s steered.”

If it sounds like I’m indifferent to tires, I am not.

In fact, I think tires are ripe for revolutionary innovation.

Really, the basic tire has changed little since the first cavemen rounded off the corners of a stone block and began frantically chasing his invention down some steep pre-historic hill.

I know used old tires are a terrible burden on the environment. It is estimated Americans discard 259 million tires every year.

I over the past 10 or so years reduced that number by 8. Not 8 million.

I was for years the go-to neighborhood guy for putting up tire swings. It’s a real gift of mine.

I divined a way to throw and cinch a rope around a rock up any stout branch as high as 40 feet. So I helped make childhood memories for kids that will last longer than even the highly rated Dunlop Direzza ZII.

Every kid should have a tire swing. Heck, every tree. That would eliminate a lot of waste.

Another innovation that needs to be explored: Edible tires.

This one came to me years ago after I wrote a National Enquirer true survivor story about a hapless motorist who slid off a mountainous region of the Pennsylvania Turnpike and was down at the bottom of a steep gorge for two weeks before he was miraculously found and rescued.

The accident had hobbled him to a point where he could only crawl.

It was incredible. He was in terrible pain and afraid wandering bears would finish him off. He said he grew more and more weak each day and feared starvation.

Four tires made out of, say, treaded beef jerky would have been a sustaining boost, a case of a something round contributing to the circle of life.

And this is true: Six months after surviving that harrowing ordeal he was crossing a busy street and was run over by a bus. It killed him.

Of course, I didn’t tell my tire salesman any of this. Tell any tire salesman you think tires should be edible and they’ll think you’re a gullible dolt and in my experience people take advantage of us gullible dolts. It’s maybe the only drawback to going through life doltishly gullible.

I did have one more question for him: Where do the tires go?

That’s not what I meant. Three years ago I bought tires that had about a 3/4 inch tread and now about 35,000 miles later the tire is smooth. Where did that tire go?

Why can’t I see it? How come there aren’t piles of it along the road? Is it so microscopic we all breathing in pounds of invisible tire dust every time we inhale?

Why can’t we make a tire that as it wears down builds up the roads? Sure, these tires would probably need to be as big as Volkswagens, but the trade-off could be reduced road construction costs and lower taxes.

I think the next generation of tires should purposefully degrade in ways that make the roads that degrade them softer and more durable.

My tire guy didn’t have an answer. He’d had enough philosophizing for the day and processed the sale without further comment.

That for me was a victory.

The tire guy was tired of me.

I left lighter in the wallet, but satisfied by the transaction.

I was on the kind of roll that had nothing to do with four new tires.

SCOPEtics & the sunny side of climate change

Results of my weekend crashes, the car & the computer

Someone keyed my car; suspects abound!