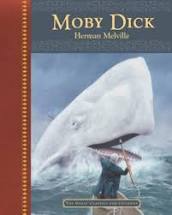 I try and read “Moby Dick” every five years or so because I find I discover something new every time.

For instance: I just realized the only character in “Moby Dick” with a proper first and last name is Moby Dick. The rest — Ishmael, Ahab, Starbuck, Flask, Stubb, Pip, Queequeg, etc — have only one name.

Another Did You Know? The world’s most popular coffee chain was nearly named after Capt. Ahab’s accursed vessel, but marketing strategists opined people might be reluctant to pay $5.50 for a latte from a place whose name is pronounced “PEE-quod.”

It’s trivia like this that led me to conjure what is, to me, one of my best lines:

“If fans of the band The Grateful Dead are called Deadheads, what does that make those of us who revere the book ‘Moby Dick?’”

I find a way to work that one into nearly everyone of my talks. It always gets a surprised burst of laughter. It’s kind of an inside joke everyone can get so everyone who hears it feels a little smarter.

I feel a cruel sort of kinship to author Herman Melville. It’s easy to peg us both as colossal bottom-line failures.

In fact, Melville’s enduring masterpiece, “Moby Dick,” was judged such a flop he ceased writing novels and spent the remainder of his life as a customs house agent. I don’t know what that is, but I’ll wager the duty doesn’t require a stunt double.

And a flop it was.

One 1851 release review said: “The style of his tale is in places disfigured by mad (rather than bad) English; and its catastrophe is hastily, weakly, and obscurely managed.”

Another wrote: “Ahab's long soliloquies induce weariness or skipping,” which is true, by the way. I often skip dozens of pages at a time, but, ouch.

A PBS feature on Melville says it wasn’t until 30 years after his 1891 death — he was 71 — that critics and readers began to appreciate him and that by the 1940s, Americans at last recognized his genius.

Would I accept that swap, everlasting posthumous glory following a life of fret and woe over every measly cent?

I wonder if he, like me, contemplated dubious measures to secure fame or at least respectful acknowledgement when simply doing good work didn’t work.

Financial stability, you see, is my great white whale. I, its Ahab.

Among the slew of painful cancellations imposed by COVID-19 precautions were two high school career days. I’m disappointed because I love doing these. Understand, I’d never mislead a child considering his or her life path.

It’s why I always ask the students two questions. The first is who wants to be a writer? In any group of 20, a handful of, well, hands raise (I think about half are just being polite).

Then I ask my second question: “Now, who wants to be rich!”

Every single hand shoots up, including all the teachers.

“Want to become rich? Become a writer like me,” I say.

Then I spend the next 20 or so minutes regaling the students about the people I’ve met, the things I’ve done, etc.

“Truly,” I tell them, “I’m one of the richest men you’ve ever met. And it’s all thanks to being a writer.”

I truly believe that.

And I vow to continue believing it. Heck, I’m convinced my next book will be a New York Times best seller — and won’t that be swell!

Some of this may sound preposterous, like crazy talk from a guy who should bail on his dreams and put in an application down at the customs house.

But what do you expect from a stubborn old dickhead like me?

Thank you. Humor is a very good thing. Love you my friend.