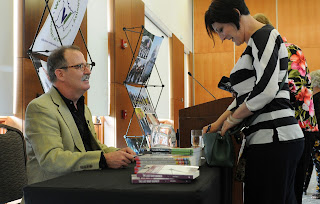 I guess the most surprising — and touching — review came from a friend who I consider one of the good guys. He’s polite, thoughtful and eager to help the needy. If he saw an old widow’s cat stuck high up in a tree, he’d commence to climbing.

He said my book made him want to be a better person.

It was not my intention, but I can certainly understand the sentiment. I’ve been signing a bunch of books thusly:

“Only a handful of golfers on the planet will ever know what it’s like to play golf like Arnold Palmer played golf. This book shows us all how we can each live just like he lived.”

It’s true. We can all be kind, stylish, bold, playful, work hard, be charitable and go for every par 5 in two. Arnold Palmer had a lot of money — some estimates say as much as $800 million — but none of those soulful behaviors requires even a cent. It’s why I tell people this isn’t a golf book.

Surprising, isn’t it? It seems like to me the book’s been out and robustly selling for six months. In fact, I got my first copies March 31.

What’s happened in those six weeks?

Well, it seems like every single man, woman and child in Latrobe has bought three copies each.

I’m overjoyed by the local reaction. It feels like the book’s put a smile on the whole face of Latrobe.

And now the rest of the country — lots of Palmer fans there, too — is starting to follow suit. Here’s what one influential Texas golf writer wrote:

“If you're an Arnold Palmer fan (and who isn't?), or a golf fan, or a fan of really, really great storytelling, I suggest you plunk down some of your hard-earned cash and buy my friend Chris Rodell’s new book, "Arnold Palmer: Homespun Stories of The King.

“Chris is a truly unique storyteller, and boy, does he have some fantastic tales to share from his years working one-on-one with The King himself. During their time together, Chris made Mr. Palmer laugh more than a few times. I promise you'll laugh, too. Go get this book now and enjoy!”

I’m so flattered by this kind of praise.

My publisher said they are thrilled with the pre-sales and all the interest the book’s already drawing. I asked what we could do next to ensure strong sales in places beyond Latrobe.

She said: “For starters, tell your friends and family to review the book on Amazon. There's a lot we can do with Amazon promotions if your book has 10 or more reviews over 4 stars.”

Ten or more 4 stars? I hear more than that when I stroll from my Tin Lizzy bar stool to the men’s room.

So if you did like the book and have the time, you’ll be helping me out if you can sign onto Amazon right here and say nice things about the book.

It doesn’t have to be fancy or verbose — so don’t use my blog as a model! Just if you liked the book say you liked it and why. It can be as simple as, “I really liked Rodell’s book ‘cause it smells nice.”

I for years have dreamed of getting a 5-star review from some critic based solely on nasal reasons.

If the book made you want to be a better person, I’ll be humbled if that’s what you say.

As long as no one says the book is a real stinker.

So will you do it? Can I count on you? Is it too much of an imposition?

• To celebrate the official release day of "Arnold Palmer: Homespun Stories of The King," here's a 1:20 video of me discussing how Palmer's rivalry with Gary Player extended to even things like the consumption of bacon.