In a hurry to relax? Go to Bedford Springs 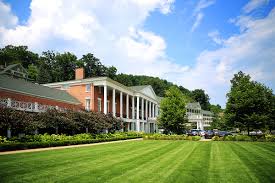 Arnold Palmer once flew his $23 million Citation X private jet from the Arnold Palmer airport in Latrobe 58 miles east to play golf at Bedford Springs Resort. The jet is capable of flying 700 mph so the entire flight took just 12 minutes.

Some may cringe at the aerial extravagance.

When you have your heart set on going to Bedford Springs, you want to get there as fast as possible.

We just spent the weekend there — we departed grudgingly — and now I’m trying to divine a way that’ll return us PDQ.

I’m thinking maybe massive medieval catapult. If we refine the trajectory just right we’ll be able to safely splash land in the pamper pool overlooking the very golf course Palmer was in such a hurry to play.

It’s an odd paradox that all this haste and commotion is over getting to a place that’s perfectly relaxing. And it’s not like Bedford Springs, an Omni Hotels property, is going anywhere anytime soon.

It’s been here in Bedford (central Pennsylvania, 2 1/2 hours from D.C.) for almost as long as there’s been a U.S.A. The property known for its healing waters became a resort in 1796. It has now for 221 years survived both glories and degradations to thrive as one of America’s most splendid resorts.

In these divisive times of so much exasperation, tumult and dismay, it settles the soul to be reminded there’s an America that’s endured it all before and still defiantly thrives.

Part of that star-spangled story is told at Bedford Springs.

It starts when you check in at the front desk. On the wall is a lushly stitched and a one-of-its kind, 39-star flag from 1865. History buffs will note there were only 36 states in 1865. The additional stars were affixed after the flag’s unknown creator became convinced it would soon happen. In fact, in 1867, America added four new states (Colorado, Nebraska, North and South Dakota) so the 39-star flag is utterly unique.

Some key dates and firsts:

• 1819 — Thomas Jefferson, the 3rd president, checks in for several healing weeks. He is the first of 12 future, current or former presidents who seek solace at Bedford Springs. These include Ronald Reagan, George W. Bush, Dwight Eisenhower, Andrew Jackson, James Polk and James Buchanan who spent 40 summers in Bedford and during his time in office used it as the summer White House.

• 1858 — Buchanan in the hotel lobby receives the very first trans-Atlantic cable. It’s a formal sort of howdy from Queen Victoria.

• 1895    One of the first golf courses in America is laid out by Spencer Oldham at Bedford Springs. It would eventually be updated in later years both by renown course architects A.W. Tillinghast and Donald Ross. If you’re unfamiliar with the names, having this pedigreed trio work on your golf course would be like having John Lennon, Paul McCartney and George Harrison collaborate on a birthday song written just for you.

• 1905 — One of the nation’s first indoor pools is unveiled at Bedford Springs, complete with a mineral water-fed swimming pool, solarium and hydrotherapy rooms.

• 1943–1945  — Japanese diplomats captured in Germany during WWII are housed at the resort.

• 1986 — The property closes and falls into disrepair

Much of this documented history is painstakingly preserved under glass in the lobbies and hallways. An other, much more quirky history is preserved on panes.

Look closely on the lobby glass and you’ll see scrawled evidence of matrimonial fidelity from more than 100 years ago. As today, tasteful brides-to-be from the 19th century flocked to Bedford for their nuptials.

One from 1888 was named Millie Schwartzfelder. All that is known about Millie is she was a suspicious bride. She doubted the authenticity of her diamond wedding ring.

How do we know?  Because she is one of maybe a dozen brides from that era who “trued” their diamonds to see if they were authentic enough to cut glass. The brides — vandals, really — etched their names in the ghostly glass.

The practice, I guess, fell out of favor when doubting brides were given the option of instead of signing their names on pre-nuptial agreements.

I’m glad you won’t find my wife’s name on any of the resort glass. We’d spent our 21st wedding anniversary there and had a wonderful time.

Bedford Springs is the place to go if you’re in a real hurry to really relax.

Bedford Springs: Ghosts in the glass at historic resort

The Greenbrier, the bunker & the billionaire

Pittsburgh for the holidays: Why go anyplace else?