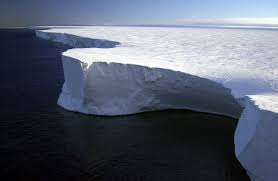 Alarming news about the rapidly melting Antarctic glaciers has me scrambling for silver linings. They say the inundation of as much as 13-feet of water could swamp global coastlines where 50 percent of the world’s population lives.

Could disaster be averted if everyone in the heartland started digging really deep backyard pools?

The problem isn’t having too much water. Water is essential to human life.

The problem is having too much water where no one needs any more water.

I used to worry Earth was going to run out of water. Now, I worry we’re going to have too much. It’s like every other day humanity must decide whether it wants to die of thirst or drown.

When did life become such a daily disaster film?

Researchers say a Texas-sized iceberg is about to break off the Antarctic. They say this will eventually melt, a prelude to the loss of the icy continent. Fun fact: ants, the most prolific species on the planet, can be found on every continent except the one that includes “A-N-T” in its name.

So everyone is fretting a Texas-sized iceberg is about to break off into the ocean.

I say tow it to Texas!

That much fresh water could turn the arid state into a green paradise. I love the plush Texas Hill Country, but dousing the scrub lands of West Texas could transform deserts into farmlands that could feed the world.

I’ve never been to west Texas, but I understand it’s very flat and unrelentingly nondescript. Texas troubadour Robert Earl Keen says it's so flat that on a clear day you can see the back of your own head.

Besides agricultural uses, that much water could serve civic purposes. Texas is full of filthy Texans who could — lather, rinse, repeat — use a good soaking, giving fresh meaning to “scrub” lands.

I used to think industrial efforts to desalinate ocean water for human purposes just confirmed my theory that humans are nothing more than parasites with personalities.

That’s because a major part of my planet-saving plan will require lots and lots of fresh water.

I’m talking about saving the planet by — hallelujah — drinking more.

Sure, you’re welcome to wuss out and drink plain water. I’m unsure about the legitimacy of the claim and too lazy to research its validity, but it’s recommended we all drink “8 x 8” (eight 8 ounce glasses of water) each day.

It makes sense. Our bodies are 60 percent water. Again, without the benefit of research I’ll speculate the rest is 30 percent muscle, 6 percent bone, 3 percent compacted fecal matter and 1 percent brain.

Feel free to transpose the last two percentages based on political party affiliation.

But water is essential. It flushes toxins, carries nutrients to cells and provides necessary moisture — our bodies’ oil — to all our moving parts.

Of course, the real yeoman work will be done by a demographic frequently disparaged as drags on the planet, not its saviors.

I was too muddle-minded to realize it, but I’ve spent much of the last 35 years helping to save the plant.

We can be the wobbly vanguard of a new environmental movement, only instead of bagging sand on flood plains we’d be the ones in the bag.

Instead of spending our bar time discussing things like sports and which weather babes give us high pressure systems in our pants, we could elevate our conversation.

We could talk about climate change and how it’ll effect our bar.

And we could address the next big problem that’ll be a direct result of solving the last big one.

That being: Where the hell are we going to put all the piss?

On the hottest day of the year, a toast to ice

I want an overnight solution to climate change … now!

SCOPEtics & sunny side of global warming