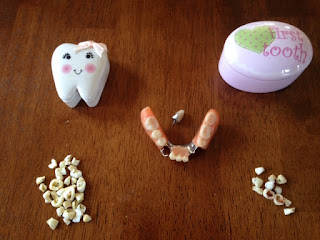 If the tooth fairy worked on scale, my Mom might have enough to afford her dentist.

Mom is one of those people who’s always had a great smile built on fraudulent teeth.

I’ve always believed it’s because she faithfully went to her dentist for intensive care which required her to keep going back to the dentist over and over for more intensive care.

She’s Exhibit A in my life-long contention that any parent who doesn’t steer their children into dentistry is being neglectful.

It may be coincidence, but he announced his retirement the same week we informed him we were moving her from the South Hills to Latrobe and would no longer require his pricey expertise. He said he was moving to Key West and looking forward to spending time on his new boat which out of gratitude I’m hoping he names the S.S. Rachel.

She followed all the American Dental Associations recommendations and saw her dentist at least once every six months. Call me crazy, but it is my belief that so much routine “care” in the long run degrades teeth thus requiring the kind of long-term commitment that leads to dentures and sword fishing aboard $357,000 Formula 350 CBR sport boats.

The only time a dentist sees my teeth is when I’m golfing with one and I happen to sink a long putt.

I’ve avoided them ever since college when some late night bar room shenanigans in Athens, Ohio — where else? — caused my face to crash onto the dance floor leading one of my upper front teeth to tango right out of my mouth.

The resulting root canal was as intensely painful as anything I’ve ever experienced.

Had an Ohio University girl hurt me as badly, I’m sure I’d today be casting about for romance with gentle farm animals.

Instead, I’ve been to the dentist just once in 30 years, the only visit coming 10 years after the root canal. The streak ended after a concerned advocate said avoiding the dentist was a huge mistake: “You need to see a dentist every six months or you’ll have all kinds of expensive and painful dental problems throughout your life.”

The advocate? It was Mom.

So I made the appointment.

Did I get fillings? No. I got something much more rare.

I got praised for being dentally unconventional.

“I don’t know what you’re doing,” said the dentist, “but keep doing it and you’ll be fine.”

See, after the dance floor incident, I became a fanatic about proper dental care. I avoided sweets and began brushing and flossing with obsessive regularity.

My teeth were crooked, but dentally I’d been scared straight.

In fact, my rigors are the reason why for the first time since the 1990s I may be visiting a dentist.

Last week, I was conducting my post-lunch floss and removed a mouse-turd sized cap one of my front teeth from an ancient chipping.

I’ll probably use it as an excuse to get my quarter-century checkup.

It happens at an odd time because I’ve been wondering what I’m going to do with all the unemployed teeth we have lying around the house.

We’ve saved all the kids’ baby teeth and Mom recently got yet another lower plate, which I keep in a drawer and remove for whenever I’m in the mood for tasteless pranks.

I can’t just throw these things away. They were once essential parts of people I love.

But I don’t think the girls will want a tin of their old teeth when they’re adults, and Mom’s has a card that reads: “DO NOT USE. THESE HURT!”

I wonder if she thinks I was planning on keeping them for my doddering days. Or maybe I’ll one day find she has a whole shelf of old dentures she changes the way other grannies change sweaters.

Maybe I’ll string the whole bunch of them together — Mom’s and the girls’ —-and wear them in a freaky necklace when I go to visit the dentist.

I’ll explain to him how for generations he and his profession have hoodwinked people into excessive dental care that may, in fact, be detrimental to healthy teeth.

That’ll all say all this while his fingers are in my mouth will only slightly diminish the dazzling impact of my message.

Just a little toothy wisdom from the Truth Fairy.

Cecil the Lion & my ever-diminishing regard for dentistry

Toothpaste, our most pleasant poison

If you are looking for the best dental clinic in India in order to make your teeth white and healthy then you can choose Ludhiana Dental Centre. We offer all types of treatment to cure your dental health.