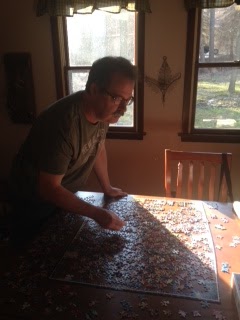 I still think of Courtney Love any time I’m doing a puzzle. I was doing one when we met.

It was July 1996 and I tell the story now because I’m pretty sure the statute of limitations for my crimes that day have expired.

It was in the rec room at the what was then known as the Chit Chat Treatment Center in Wernersville, Pennsylvania. The puzzle was a big, red covered bridge. I remember I’d made communal contributions by assembling an important chunk of the rippling blue stream running beneath the structure.

She’d been ordered to seek help there by producers of  “The People vs. Larry Flynt.” She was addicted to heroin and her drug-addled antics were disrupting the film for which she eventually earned many accolades.

I’d been ordered there because I was at the time freelancing for National Enquirer and I was the nearest reliable nut-job who had a chance of getting the story.

I remember the call: “We have a source who has a son in treatment and he says Courtney Love is there. We need you to get right out there and verify she’s being treated.”

So, I asked, you want me to check into rehab?

“Oh, no,” he said. “That is illegal. We’d never ask you to do anything illegal. And if we were ever called into a court of law and charged with asking you to do so, we would deny it.”

What he was saying was, “This is your mission. If you are caught or killed during its execution we will deny any and all knowledge of your existence.”

So with a big fat Enquirer expense account I went up there and checked into a little motel. I walked to a nearby dive bar and proceeded to splurge it all getting all gooned up with the friendly locals.

I wanted to look like I really needed rehab.

I think what cinched it was the next day and my belief I really needed to look downtrodden. I needed to step up my game to step down my appearance.

And here’s one of the reasons I cite when people ask what made me excel as an Enquirer reporter:

I decided to drive on this scorching July day with the windows up and the heater on full blast.

Looking hangover wasn’t enough. I needed to look both hangover and glazed.

It did the trick.

I parked my old Saturn Coupe very conspicuously. I wanted to be noticed. I wanted someone to come and say, ah, here’s some human wreckage we can save.

But nothing happened. I may have appeared beyond saving.

Remember, my assignment was just to confirm she was there. I found a porch where about 30 patients were milling about. I didn’t see her there.

One by one, counselors came and called each of those patients in for treatment and  eventually I was all alone again. What to do? I went inside and found my way to the community rec room.

Understand, I was very nervous. I could have been arrested for trespassing and who knows what else. My idea was to just bide my time and prove to my editors I did the best I could.

I sat down at the big table and began working on the puzzle. It felt therapeutic even for me.

Then into the room walks this impossibly thin woman with a ribbon of four-leaf clovers surrounding her ankle.

It was Courtney Love.

And, yikes, she was with a counselor who was saying, “You have to be alert to any strangers. We know reporters are trying to get in here and talk to you. If you see anyone you don’t know come and get one of us right away.”


I’d wanted to appear glazed. Now it seemed I was invisible.

It was an eerie experience to be so close to being busted and realizing it wasn’t going to happen.

I pushed away from the puzzle and followed the pair onto the porch.

The counselor split. Off, I guess, to chase more ghosts. Courtney sat in an adirondack chair.

I turned to face her — she has beautiful blue eyes — and asked, “Do they help people here?”

And off she went. She must have talked for 15 minutes. She told me she was worried about orphaning her daughter so she wanted to get clean. She told me about her struggles and her dreams.

In fact, she wouldn’t shut the hell up. I think my five-word question was the extent of my conversational contribution.

I don’t know whether she was becoming suspicious or if she really wanted to help me, but she said, “Wait right here!” And she took off.

I got the hell out of there hoping I wouldn’t be followed.

From a safe distance, I called my editor and told him I’d scored an in-rehab interview with Courtney Love. He said, “That’s great! What do the pictures look like?"

It’s funny, but I’m starting to think more about Jim Mellett than Courtney Love when I’m doing a puzzle, which is often.

Jim’s a popular Pittsburgh illustrator who for 20 years has done artwork for White Mountain Puzzles. He’s done more than 40 distinctive puzzles and each is something to cherish.

He told me he is assigned the topic, does the research, a sketch and then redraws the whole image on an illustration board before the final painting is done.

He loves what he does.

“The best part is getting comments from friends and especially customers who track me down and send me emails,” he said. “ Many times they are asking about someone or something they don't recognize, but many times they are just contacting me to tell me how much they enjoyed the puzzle.”

He sent us two of them — “Broadway Musicals” and “Television Families” each are 1,000-piece jumbos. Very intricate.

The “Broadway” one is now consuming our dining room table.

There’s something irresistible about building a puzzle. The nice part, too, is it’s cutting back on the TV time.

For me, doing puzzles is a reminder of how to solve any difficult problem: remove emotion and just apply logic.

The pieces are all there. They fit and when you’re done — voila! — it all makes perfect sense.

It’s just a matter of puzzling it all out.

I wonder if Courtney’s ever thought of trying it that way.

Stolen Valor and my pretend life