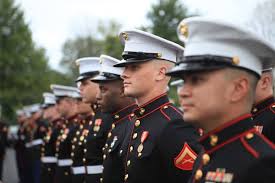 This one’s from Thanksgiving ’11. I’ll be thankful if you read it aloud at the dinner table right before the Thanksgiving prayer.

Thank you for being my friends. I hope you have a wonderful Thanksgiving Day and remember the men and women serving in our armed forces in your prayers.

I advise you to start tomorrow, as I do every Thanksgiving, by playing the 2006 Ray Davies song, “Thanksgiving Day.”

I’m grateful for their service. They are just the most impressively composed human beings on the planet.

I’ve never seen a Marine in action, but I imagine they could overwhelm most any enemy with just manners and posture.

We got on together in the lobby. I asked this man who does so much for me and our country to do one more thing.

Could he please push 15?

If my room had been on the 353rd floor it might have given us enough time to talk up a real friendship.

But we had a very friendly chat, enough so that when the elevator floor bell rang I felt comfortable looking this strong, proud man eye to eye and saying, “Happy Holidays” hoping he’d know what I really meant, which was:

I marched right the hell out that elevator door like I knew where I was going leaving this Marine to logically conclude I’m an idiot.

I’ll bet the nation is full of slouching idiots like me.

We have to wait around 364 days until the one day comes when we’re comfortable saying a truly heartfelt thanks.