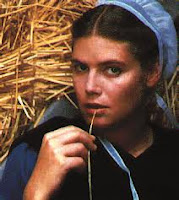 “Miriam arose from the stool beside her butter churn and approached Jacob with lusty intentions. She seized his stiff wick in her rough, able hands and gave it a good long dip.”

Needs some work, I know. But I thought I’d leave it up to sensitive readers to decide if Miriam and Jacob were engaged in Amish sex or merely making a supper table candle.

Back to the new feature.

It’s this post’s word count. From now on I plan to include right at the very top in parenthesis the total word count of that day’s offering.

Even though I’m unshackled by any artificial space constraints, I still try not to exceed about 750 words per post. That’s traditionally the length of one column up and down a broadsheet newspaper.

It’s a format still favored by the majority of newspapers. And that column includes enough space for just about 750 words.

Ideally, I think my blog posts should be about 600 words, but I can’t help myself.

That nonsense about the Amish sex? It consumed 92 words. I should probably cut it but it seemed like a good idea when it came to me, and I don’t have an editor to shout at me it’s too stupid to include.

I was raised in newspapers and remember deadline tyrants screaming at me about spacial concerns.

I remember the time I had a page one story about a major cocaine bust that required 1,000 words of crisp copy, a challenge because I only had about 600 words of facts and quotes.

I told him that was impossible. I’d exhausted the topic.

“Then write 400 more words on the chemical composition of cocaine, if it has any household applications -- some damn thing! Just give me 400 words -- and I need it in 90 seconds!”

It was very stressful.

So today I write as long or as short as I please with the understanding the internet’s not going to run out of room.

The word count will let you decide if you want to invest in that day’s offering.

I thought about putting something like “2 mins, 40 seconds,” that being the average time it should take to read it.

But someone might feel boneheaded and sad realizing it’s taken them three minutes. Other hyper-competitive sorts might post comments bragging they read the thing in, say, 89 seconds.

The two activities should be savored.

I understand adding a word count will present me with temptations to deceive.

If I see a trend of more readers checking out posts that are about 600 words, there’s nothing to stop me from putting (599 words) atop a post that’s 1,232 words long.

Or if I write something that seems particularly pointless to even me, I might type “4,430” in hopes it’ll discourage readers from investing the time.

I’ll try not to do that.

I’ll try, instead, to be honest, to keep my wick trim, my candle bright and to continue ever onward on my relentless quest to make every single word count.