Re-run Sunday: All snowmen are abominable 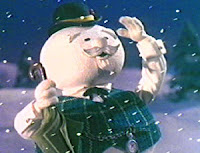 I've only had to shovel twice this year. There were days in February 2010 when I shoveled twice before noon. The month set all kinds of snow records and still scars my mind. Yet I survived it. Today, in homage to that fierce foe, I rerun this piece written in the teeth of the worst winter I can remember.

Besides, baby, it’s cold outside.
Posted by Chris Rodell at 3:24 PM

Email ThisBlogThis!Share to TwitterShare to FacebookShare to Pinterest
Labels: All snowmen are abominable, February 2010 was the worst winter ever, Jenga