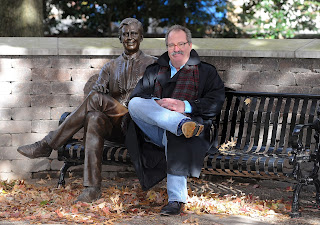 The impetus for this offbeat promotion came when a friend — he’s an avid supporter — told me he wanted to give me $4,000 cash to finance my soon-to-be published new novel and, gulp, I said no.

For any man of such meager means to say no to an envelope of cash that thick he must either be stupid or a man of good and just character.

Or maybe a little bit of both.

As many of you by now know the book is “Evan & Elle in Heaven & Hell: A Long Distance Social Media Afterlife Love Story.” At its heart — and there’s a whole lot of heart — the book is the story of Romeo & Juliet, but instead of being wooed on a balcony in Verona, Juliet is in heaven while her Romeo is in Hell stuck with a really crappy roommate.

For their love to flourish, she must lower Heaven and he must raise Hell.

The premise is easy to grasp and my friends are convinced the book is destined against all precedents to be a success. I’ve shown the first five chapters to friends and I couldn’t be more pleased by their reactions. They love it.

So why did I refuse the four grand?

I believe anyone generous enough to give me that kind of dough is entitled to a tangible return and, honestly, I couldn’t see a way for my friend to get anything back. There’s no good short-term formula in the perilous economics of self-publishing for me to make good on his investment.

I told him it’d be better for him to purchase books. He did. He bought 60 signed copies of “Use All The Crayons!” to give over the holidays to friends, family & other associates That’s $1,200 — and my gratitude is aglow.

So he bought 60 books (yay), but that depletes my stock to the point where I need by Thanksgiving 500 new books for $3,415 (boo). That’s my eternal treadmill.

You spend a large chunk of money to buy hundreds of books, which you then — cross your fingers — sell to the public one at a time for what amounts to beer money.

It’s a diabolical business model designed, it seems, to keep me in dire straits — and not the cool, lucrative band led by Mark Knopfler.

That’s the backdrop as my friend makes his generous offer.

So was there an artful way for me to satisfy his philanthropic bent and still maintain my, geeesh, professional integrity? Then it hit me … I could send his grandmother to Hell.

See, one of the key subplots of the book is how a devoted  corps of some of the greatest names from history — motivated by faith to overcome evil and bored by the redundancy of eternity — accept the challenge to invade Hell with the intent of overthrowing Satan.

I think there are enough readers who’d pay $1,000 to have the name of a loved one included alongside legendary crusaders and charismatic leaders to make it a newsworthy promotion and a fruitful one for a struggling local author people seem eager to support (means the world to me!).

I’ll list the name of your loved one (or two) in the book alongside, to name just a few humanitarians, Mother Theresa, Winston Churchill, Florence Nightingale, Ronald Reagan, Nelson Mandela and, yes, Fred Rogers.

Or, if you prefer, I could include a two or three-sentence vignette of your loved one preparing a feast in Heaven. Oe she could be gardening. Or dancing with the husband who preceded her in death by 20 years.

Maybe you’d like to include a mention of yourself in Heaven or Hell and how you envision yourself spending eternity.

The afterlife options are endless.

I’ve debated offering a range of prices, but I’m reluctant to open it up in ways that would lead to distraction in what I now believe is a fairly cohesive finished novel.

Patrons will also receive a dozen signed books of my already published books in time for Christmas. Your pick. And two copies of ”Evan & Elle” upon its publication, likely in the next six months.

You’ll be helping a local author and rolling the dice on the chance that “Evan & Elle” is the book that’s going to lead to a mass audience. It’s bound to happen one day.

As I’ve been saying to anyone who asks, “My career is really taking off. It’s just that the runway is really, really long …”

And if you’re one of those readers chagrined about being unable to support in ways more lavish, fear not.

You need no further print affirmation of your heaven-worthiness.

Anyone who reads this far is already an angel in my book.