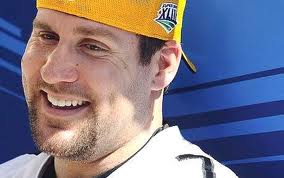 “Good afternoon, Pittsburgh Steelers offices.”
Hi. Can I ask you some oddball questions?
“Sure! Go ahead.”
I’m trying to find out how many fans turned in their Ben Roethlisberger jerseys last summer when he had his personal trouble down in Georgia.
“I really don’t know.”
Well, was it dozens? Hundreds?
“I don’t know. That didn’t pertain to me.”
What happened to them?
“I don’t know. I believe they were donated. Why do you ask?”
Well, I turned mine in along with a letter to Art Rooney saying Roethlisberger had disgraced the team with his sexual assault in Georgia.
“Yes?”
And now I’d like to get the jersey back.
“You what?”
I’d like to have my Ben Roethlisberger jersey back in time for Saturday’s playoff game.
“You want it back?”
Exactly.
“Well, I’m sorry, but that’s impossible. They didn’t keep the jerseys. Thank you and goodbye.”
Will the Steelers replace the one I turned in?
“No. Goodbye.”
Of course, I knew the jersey I so sanctimoniously turned in to the Steeler headquarters last April was gone.
But I thought it would be fun to give the Steeler receptionist something to talk about when someone asked her how her day went.
Really, I’m surprised some lunatic fan hasn’t done that for real. There is no limit to excessive fan behavior and with the rival Baltimore Ravens in town things are at fever pitch here in the ‘burgh.
I don’t want his jersey back, but being a lunatic fan during playoff time I do have an announcement to make:
I forgive Ben.
This is important because I consider myself a moral arbiter about all that’s right and good concerning the Steelers, Pittsburgh and, really, whatever else is going on in the universe.
It’s just what nosey guys like me do. It’s a pity the gig doesn’t pay squat.
But when a 20-year-old college student accused Ben of recreational rape in a club bathroom, I was outraged. Then came all the stories, ones we in Pittsburgh had heard for years, that he was just a total jerk.
He was never charged, everyone involved was drunk and no jury in the world would have convicted him, according to the country prosecutor who still gave him a good scolding.
I wrote that we needed to dump him, that Pittsburgh and the Rooney family needed to hold our players to a higher standard.
I still believe that.
And from everything I’ve heard, Ben is now living up to that standard so rarely applied in professional sports. Local reporters, many of whom are friends of mine, recently awarded him The Chief Award, named after beloved Steeler founder Art Rooney Sr.
The good-guy award goes to the player who is most cooperative with the press. For him, it’s a dramatic turnabout and an indication that his efforts to change are sincere.
I know a guy, too, who attends church with Roethlisberger. Of course, it’s difficult for anyone to seem like a jerk in a church pew, but my friend says he’s been a friendly and welcome addition to the congregation.
That’s all good.
For me, the tricky part is how would me and other forgiving fans feel if he was playing lousy.
Yes, he’s been great. We are a society that overlooks a lot of flaws if they come with a lot of wins.
I don’t think that’s entering into my thinking.
But I’m a big second chance guy. I was very happy to see Michael Vick emerge from a long prison sentence for dog fighting and to have a fantastic year.
I love to see guys like him turn their lives around. It’s why what happens to Ebenezer Scrooge will always resonate.
So Ben seems to have made the most of his second chance.
I won’t rush out and buy another Ben jersey and am relieved the receptionist at the Steeler HQ didn’t call my bluff and tell me to come on down and pick one up.
But as we’re nearing kickoff, I can feel comfortable about rooting for Ben.
I guess I’m like a lot of people in Pittsburgh.
We want our Steelers to kick ass, not prowl around in dingy bathrooms trying to snag pieces of it.
Posted by Chris Rodell at 3:04 PM

I know what you mean. It's been good to see both of those QB's pull themselves together and come to terms with what it means to be a man – and not just a football player.

Tom Brady, after living a full life, died. When he got to heaven, God was showing him around. They came to a modest little house with a faded Patriots flag in the window. "This house is yours for eternity, Tom," said God. "This is very special; not everyone gets a house up here." Tom felt special, indeed, and walked up to his house. On his way up the porch, he noticed another house just around the corner. It was a 3-story mansion with BLACK & GOLD sidewalk, a 50-foot tall flagpole with an enormous STEELERS logo flag, and in every window, a TERRIBLE towel. Tom looked at God and said "God, I'm not trying to be ungrateful, but I have a question. I was an all-pro QB, I hold many NFL records, and I even won a few Super Bowls." God said "So what's your point, Tom?" "Well, why does Roethlisberger get a better house than me?" God chuckled, and said: "Tom, that's not Roethlisberger's house, it's Mine."

That joke, Mark, gets joke of the year from me. Hilarious. And clean, too! That's a rare combo. Thanks for posting it.